It was to this open range that Bill and Margaret Broussard came in 1969. Originally from a Louisiana ranching family and trained as a physician, Bill came to Florida following eight years of military service to establish a medical practice and get back into ranching. The Broussard’s set out to create a fitting tribute to their son Allen’s legacy and in 1990 founded the Allen Broussard Conservancy.

The Crescent J Ranch is a working horse and cattle ranch, located within the lands known as Forever Florida, and is a key part in the mission of ecological education and preservation of native Florida land and species.

Read about the Charlolais herd (originating in France), selective breeding, endangered breeds and what they mean to Florida.

The Charolais herd on the Crescent J Ranch is The Foundation Herd of Charolais in North America! That means: these cattle are descended from the first herd of that breed to be brought from France to North America, specifically, to Mexico, right before World War II. There were a few Charolais bulls imported into the US from Mexico, but the first full-blooded females to come were the ancestors of these Charolais on this ranch. Since then, other full-blooded Charolais have been imported through Canada, but the Crescent J herd, descended from the first ones, is called The Foundation Herd of Charolais in North America. To make room for our Cracker herd, most of The Foundation Herd have been sent to the Texas ranches of our partner there, the Lasater family, of Beefmaster fame.

There is a framed story on the “Wall of Fame” in the Visitor Center that tells more about how the Charolais herd was brought from France to Mexico in the 1930’s by a FrenchMexican, then from Mexico to the Flying J Ranch in Louisiana by Dr. Broussard’s father in 1953, and from Louisiana to the Crescent J Ranch in 1972 by Dr. Broussard.

Unlike the Cracker herd that has uncontrolled breeding (except that the herd must contain only registered Cracker bulls and cows), the breeding of the Charolais is strictly controlled, so that each calf’s parents are known and recorded with its registration papers. Every animal has a unique number (true of all our cattle and horses); every one is weighed regularly and each breeding adult is judged, not only by its own history of weight gain, but also on the weight gains of all his or her calves. Each cow must also have a calf every year, or have a good reason not to have one. (It’s “produce or perish.”)

Both low birth weight and rapid weight gain by calves is important. They are determining factors in the relative value of each calf. Low birth weight means fewer calving problems. Calves are weighed at birth and at weaning, and their weights are standardized by a formula so that their gains can be compared. Those that do not gain weight fast enough go to market (to be butchered) after they have grown enough. Cows or bulls that do not produce low birth-weight calves that gain weight rapidly also go to market. We keep all the female calves that don’t go to market. The very best bull calves are also kept for breeding here; the next-best are sold to other ranchers for their breeding programs. This is the method of selection that, over 35 years, has produced the top-of-the-line Charolais that the Crescent J is famous for, not only in Florida, but also in Texas.

There are now some cross-bred cattle here that are half Charolais, half Cracker, and a handful of cross-bred descendents of old Beefmaster cows that were too sick or crippled at the time to go in an earlier shipment of our Beefmaster herd to our Texas partners. These cross-bred calves grow fast and are the source of the beef served in The Cypress. They are not registered or kept for breeding purposes.

Another characteristic of Cracker horses is their fast walk, a gait that is much more comfortable for the rider than a trot. Actually, there are two such walking gaits, a singlefoot gait and a special gait that only a few have that is sometimes referred to as pacing. (An old Cracker term is “coon-rack.”) Pretty Boy is one of only maybe 5% of Cracker horses that pace instead of trot. He’s genetically programmed to pace, moving faster and faster in a pace, then breaking into a canter, then a gallop. It is such an easy ride that in order to get more horses with that gait, he is our senior herd sire, with the largest herd of mares. Some of his male offspring with that gait are now siring foals. Some of his daughters and granddaughters with the gait are also producing gaited offspring. We found another Cracker stud with that high-quality pace, from the State’s Payne’s Prairie herd. We bought him (Tequila) to diversify our Cracker horse gene pool. We also have quite a few pacing females. So we are bringing back a valuable genetic characteristic that was almost lost. We continue to purchase from the few other owners of unrelated registered Cracker horses in Florida or other states to broaden our genetic base.

The Paso Fino and Criollo horses of Central and South America are descended from the same Spanish Colonial horses that were the ancestors of our Cracker horses. Paso Finos, in particular, command high prices for that same pacing gait. To gain a similar reputation for our Spanish Colonials, Sandra Wise and Dean Van Camp have been training and recently showing some of those beautifully trained gaited horses. The publicity from the shows and the satisfaction of our customers will increase the value of our beauties.

We have recently begun efforts to preserve another breed – Black-mouth Cur dogs, a subbreed of the Florida Cur that figures prominently in the Florida’s ranching heritage. We purchased two pure-bred, registered females, Abby and Amber, from Texas and one male, Tucker, from New Mexico. Their puppies, when registered, will be very valuable. We could not find another source for registered Black-mouth Cur puppies in Florida.

Cattle, horses and dogs were integral parts of Florida’s ranching heritage. The heritage picture would not be complete without any one of them.

Cracker cattle and horses are recognized by the American Livestock Breeds Conservancy as critically endangered breeds, so you can see that saving them is carrying out part of the mission of the Allen Broussard Conservancy. The ALBC does not register any kind of dogs. (They aren’t livestock in the U. S. – in China, they are!) 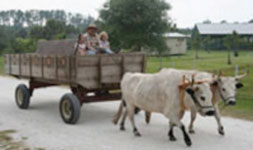 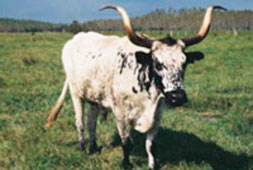 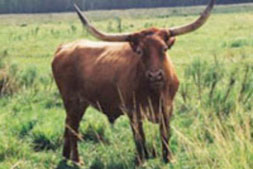 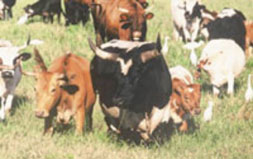 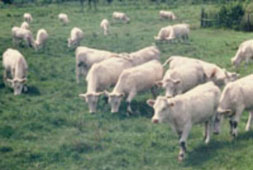 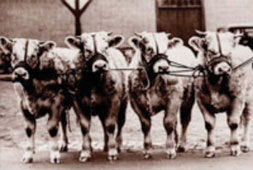 Our 100% Grass-Fed beef is available for sale at our Visitor’s Center. The cattle used are from our own herd here at Forever Florida.