The largest herd of registered Cracker horses in Florida (and in the world) is also on the Crescent J. They are being bred to bring back some almost-lost Iberian genetic characteristics such as the Spanish Gennet pace, an easy-riding, fast, single-foot walk and other characteristics of the breed that developed in Florida during the four centuries they ran feral in Florida, such as intelligence, endurance, hardiness and resistance to parasites. On the Crescent J, young Cracker horses are trained to be good cattle-working or trail horses. Some taken to horse shows bring back blue ribbons.

These first cattle of the New World were from Spain. Spanish Colonial horses came from several Spanish breeds including Andalusian, North African Barb, Spanish Sorraia, Spanish Jennet and Arabian. Conquistadores like Christopher Columbus, Juan Ponce de Leon and Hernando Desoto brought cattle and horses to breeding stations in Hispaniola, Cuba and Puerto Rico. The first introduction of livestock into Florida was near the mouth of the Caloosahatchee River (near Sanibel Island) in 1521. Juan Ponce de León, then Governor of Puerto Rico, attempted to found a ranching colony in SW Florida but was driven off by the Calusa Indians – after cattle, horses and possibly other livestock had been off-loaded. Ponce de Leon received a mortal wound and was taken to Cuba where he died from infection. The Indians took charge of the abandoned livestock.

By 1540, there were cattle in the Panhandle. Don Diego Maldonado brought a large herd of Andalusians to Pensacola Bay in order to supply the expedition of Hernando DeSoto. A large shipment was brought to St. Augustine in 1565. Some of the cattle were either stolen by the Indians or lost, running wild in the timber, and many were released when the Spanish left. They roamed free throughout Florida for the next 400 years.

Not only did Florida receive the first cattle, but also large scale cattle ranching got its start here in Florida. By 1600, there were 34 ranches in Florida with over 20,000 head under Spanish control. This does not count the feral cattle. Ranching remained the main industry of Florida through the late 1800’s and early 1900’s while the logging industry was just beginning in Florida. Cattle ranching was still Florida’s major industry until the 1940’s when laws were passed that required cattle to be fenced in. Until that decade, cattle roamed free in Florida’s open prairies and Flatwoods. When fencing laws were passed, ranchers had to buy land and maintain fences, which dramatically increased the cost of ranching. Ranching remained a very important part of Florida’s economy, decreasing slightly in the 1970’s, but it is still a part of the economy to this day.

Today, the descendents of the original Spanish cattle and horses are known as Cracker cattle and Cracker horses. The term “Cracker” has many stories behind it, from just a term for poor settlers to the sound of the whip the cow hunters used. The first known use of the term came from British frontiersmen coming into Florida in the 1700’s. These first Crackers were mostly of Scottish descent; today anyone born and raised in Florida is referred to as a “Florida Cracker.” There are Georgia Crackers, too, and poor whites are sometimes called Crackers in other southern states as well.

Since Florida was the first place in America to have cattle and horses, it was also the first to have “cowboys,” but they were not called cowboys. Florida cattlemen were known as “cow hunters” since they had to ride into the “rough wood” to hunt down and bring the wild cattle into market. The term “cowboy” was regarded with disdain since cow hunter work was a man’s job and no place for a boy. The cow hunter was a rough and rugged man with skills in working cattle, hunting and surviving off the land. The cow hunters would spend days and weeks living away from home hunting cattle. Today, there are few cow hunters left. Most men that work cattle in Florida now are known as “cattlemen,” since the noun “cowboy” is still looked on with some disdain. It’s used as a slang verb: “I used to go cowboyin’ all through these parts,” says Billy Davis.

Cattle ranching has had a tremendous impact on the land. The early days of free ranging cattle had minimal impact on the land; the main impact coming from the grazing of native plants. Florida’s prairies and flatwoods did not evolve with heavy grazing, so the introduction of cattle and horses stressed the land and native plants; however, they recovered as the herds moved on – before there were fences.

The major impacts occurred in the 1940’s and beyond when the free ranging days ended, cattle were fenced in and the native prairies and Flatwoods were transformed into pastures. The native soil was changed by the lime and fertilizer added to support the foreign grasses that were brought in to support the cattle. The native grasses had evolved in the acidic, nutrient-poor native sandy soil; they can’t live in the richer, less-acidic soil resulting from the addition of chemicals. Also, the land was ditched and drained, lowering the water table and further changing all the native systems. All of those changes hurt the native wildlife populations of many birds, mammals and reptiles, while species like deer and turkey benefited. Of course, cattle and horses benefitted. That was the idea.

Another result of improved pastures is the runoff of pesticides and fertilizers, including manure, into the water systems of Florida. These fertilizers and pesticides have introduced toxins that poison fish, arthropod (insects and spiders) and amphibian (frogs, toads, salamanders, etc.) populations that in turn poison animals such as alligators, otters, birds and other predators. We humans also depend on those water systems for our drinking water.

On the Crescent J, a system of rotational grazing results in cleaner runoff from pastures. Most ranches allow the cattle to graze freely in very large pastures. Then they go lie down in a cool, usually damp, spot, leaving manure where it soon drains into moving water. Dividing pastures into smaller grazing cells and rotating the cattle from one cell into another every day makes them scatter all over the fresh grass, dropping their fertilizer all around the cell instead of in the wet spots which drain into Bull Creek, then into the St. Johns River, the source of much of Florida East Coast’s drinking water.

Our guests can see the differences between the Crescent J Ranch and the native wilderness of Forever Florida. It is intended that they leave with some knowledge of why they are so different, what has been gained and what has been lost by changing prairies, scrub and flatwoods into improved pastureland. 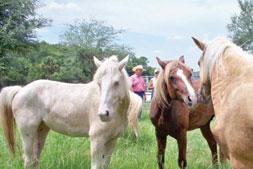 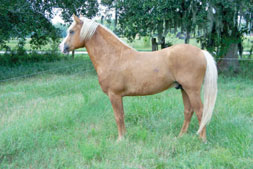 In 1979, Dr. Broussard learned about a system of managed grazing that could increase the herd carrying capacity of available pasture by about 50%. This is accomplished by dividing the pastures into grazing cells and rotating the cattle through the cells every day or two. The size of the cells is determined by head count. He divided all the pastures on the Crescent J with solar-powered electric fences in order to implement this advanced system of managed grazing.

The cattle quickly learned the routine and are always ready to move immediately into each new cell in its turn. They eat everything in the cell instead of wandering around a large pasture, picking out their favorite grasses. When they leave that cell, all the grasses begin to recover at the same time. When the cattle are rotated back into that cell a month or so later, all the grasses are fresh, instead of some being old and dry. This not only makes better use of all species of grass in the cells, but also spreads the manure around the entire area, as the cattle don’t just go in the afternoon to their favorite spots to lie down, chew their cuds and when they get up, drop their manure where it becomes a source of polluted water that could drain into canals or creeks and eventually into some source of drinking water.