In 1990, William and Margaret Broussard founded the Allen Broussard Conservancy as a tribute to their son, who lost his life at age 29 from an infection after heart transplant surgery. His heart had been damaged by the chemo- and radiotherapy received as treatment for the Hodgkin’s Lymphoma diagnosed when he was nineteen. Allen was a conservationist and friend of Florida, forever.  The Allen Broussard Conservancy (ABC), a 501(c)3 Florida Not-for-Profit Scientific Corporation, owns the conservation area known as Forever Florida.

Long before cattle ranches, theme parks, or highways developed regions in Central Florida, the land was home to a wide variety of animal life. Even as Florida became more populated, large sections of Central Florida remained undeveloped due to the lack of roads. One of the few industries in the area was Consolidated Naval Stores, which harvested lumber throughout the Bull Creek area. By the 1940′s, Consolidated Naval Stores had completely harvested the local forests and ceased operations. They left the land barren, even disassembling the houses used for the workers.

In the 1950′s, a Miami-based land consortium began selling plots of land in what is now Forever Florida to unsuspecting real estate speculators. Lots were sold for approximately $5,000 per acre. Unfortunately for the hundreds of purchasers, the land was zoned agricultural and lacked access roads. Essentially it was worthless for residential or commercial development, and reverted to its wilderness state. As the surrounding land became more developed, this wilderness became the sole source of refuge for a variety of animals and birds.

“We want there to be a place for natural Florida to exist, to be seen, studied, and learned from.” – Dr. William Broussard 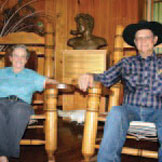 Originally from a Louisiana ranching family and trained as a physician, Bill came to Florida in 1969 following eight years of military service to establish a medical practice and get back into ranching. With his wife, Margaret, Bill set out to create a fitting tribute to their son Allen’s legacy and in 1990 founded the Allen Broussard Conservancy.

The Crescent J Ranch is a working horse and cattle ranch adjacent to Forever Florida, and is a key part in the mission of ecological education and preservation of native Florida land and species.